This is the question: https://stackoverflow.com/questions/11158721/sql-not-like-not-working.

My answer was the following one. 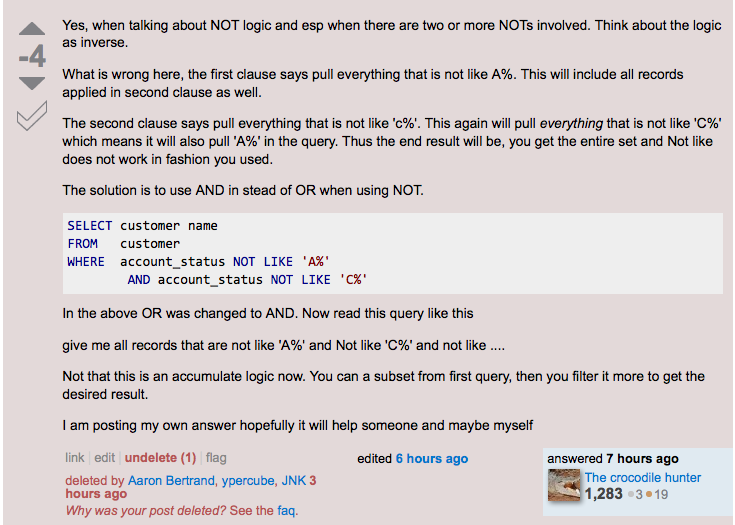 I asked in chat if I did anything wrong by asking that question. The trasnscript is here.

Then I answered this question: mysqli_fetch_row() access a specific row in the sql database

My answer was the first among all answers and I got one up-vote.

Later, somebody down-voted my answer. Still a little bit later, my answer was converted into a comment, so I lost the 8 points that I had earned.

My answer was appropriate, considering the information the question contained. There are other answers like this one and this one which consist only of ideas. They were not converted into comments. Mine provided a clear solution.

Is this an act of sabotage? I am not sure? I have never seen this.

discussion moderation specific-answer
share | improve this question | |
edited May 23 '17 at 12:35

To answer the question in your title: it was converted because it was flagged, and didn't appear to actually answer the question. I'm not familiar enough with the subject to say for sure that it didn't, but it sounds dismissive - as though you were primarily concerned with telling the asker what the routine doesn't do, and less interested in telling him what would work.

I'll agree that a couple of the other answers aren't much better. Part of the problem here is that the question wasn't particularly clear: my best advice when answering questions like this is to go beyond the simple answer and try to provide enough instruction so that a user who is obviously already confused by the technology he's using can learn from it rather than walking away even more confused by what you're telling him (even if what you're writing might be an obvious answer to an experienced user, an experienced user wouldn't ask such a question to begin with).

Now, for your other question,

People got a little bit offended and my question and answer were seriously downvoted to the point that my answer was deleted and I got a score of -7 on my question.

This depresses me a bit. This question wasn't very good (titles of the form "x is not working" are a big red flag) and possibly should've been closed as a duplicate (though frankly, the answers to the question that was suggested are... not great), but instead the answer was heavily down-voted and deleted. The takeaway here is really that you need to be double-sure you're asking a good question when you're also providing an answer - it's easy to be too close to a problem you've solved yourself, and unable to accurately describe what you were struggling with as a result.

Did you read the first 3 comments?

This is really very very basic SQL. It's how OR works! – JNK 6 hours ago 3

If you're going to post a self-answer at least make it a good one that's not been covered to death. – JNK 6 hours ago

The title is inaccurate, as well.

As for the other post, I seriously doubt that your answer to an unrelated question was downvoted in relation to this.

I sort of agree with you regarding your point about your answer being removed but not the two others; those two answers are arguably better than yours, but only slightly.

The problem with your answer (and I'm guessing why it was converted to a comment) is that it's not clear; you haven't really explained yourself. Let's look at it:

You can use your SQL command to move to a particular record and fetch your data from that point.

I think I can infer what you're talking about -- use Limit in the SQL statement... right? -- but that's because I already know the answer to the question. The Op could not be expected to understand you. In particular, your choice of phrase move to is confusing here. It might have helped your answer to provide some code to illustrate your points.

Do take another look at the How to Answer wiki.

In the second case, you are not answering the question, as you are not saying which function should be used, or which code the OP should use.

Not the answer you're looking for? Browse other questions tagged discussion moderation specific-answer .

31
What can be done to improve moderation of self-answered questions?
-16
What happened to Moderators respecting the editing grace period?

888
Why aren't people voting for questions?
1427
Fastest Gun in the West Problem
526
The current review system encourages fake reviews; some people upvote everything rather than actually fixing problems
670
Your answer is in another castle: when is an answer not an answer?
2765
A Terms of Service update restricting companies that scrape your profile information without your permission
824
Net Neutrality and Stack Overflow / Stack Exchange
2396
Firing mods and forced relicensing: is Stack Exchange still interested in cooperating with the community?
648
Monica's situation continues unresolved. Is SE hoping the problem just goes away?
2055
Stack Overflow is doing me ongoing harm; it's time to fix it!
930
Firing Community Managers: Stack Exchange is not interested in cooperating with the community, is it?