So code blocks in questions and answers on the android app (inline included) seem to be scared of me putting my finger in them.
When I poke them, they only move over two columns!

(For clarity, these are the code blocks that overlap the TextArea view because they've been eating too much)

The intended behaviour here is that when I press my finger into a code block, the touch event should register a drag; at current, I try to scroll inside a code block and I end up switching to question or answer view instead, over and over.

Something tells me this is status-bydesign because the text is deliberately cut off (probably inviting you to click on the code block and expand it; UX Decision?): 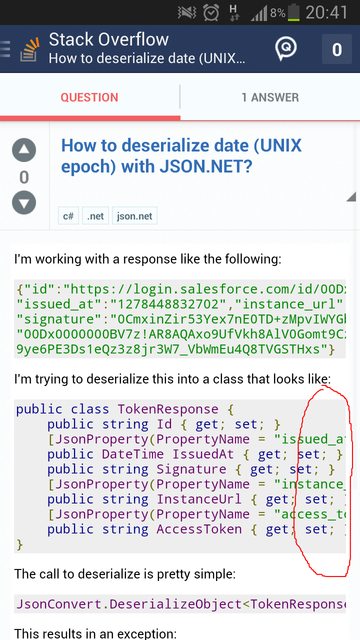 Thanks for reporting this. Starting in version 0.1.5 those code blocks won't be scrollable at all unless tapped, which should be less confusing.