Ask Question
Asked 7 years, 9 months ago
Modified 4 years, 1 month ago
Viewed 483 times
31
This question is only applicable to one specific site on the Stack Exchange network. It is not currently accepting answers. 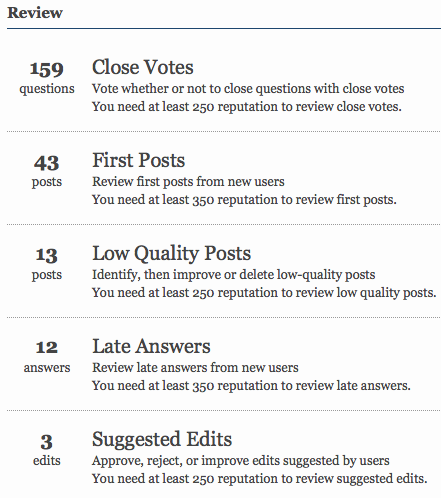 There are no community moderators.

I'm... not sure what to think about question quality...

So what's going on here?

This isn't really an answer, but adding some info; one of the issues is there aren't really a lot of people with moderation privileges (August 2014):

There doesn't seem to be enough active users to handle site maintenance, in addition to (apparent) lack of community moderators.

Also, even though rep thresholds are low, there still doesn't seem to be enough questions and activity on the site to allow enough users to gain enough rep to make a difference. It seems like the site suffers greatly due to low question activity.

Fast forward three years from this original post (March 2017) and the privilege situation has remained about the same. The highest rep user on the site is no longer active and no new users have crossed the 3500 threshold:

The goals of Ask Patents, I think, are very worthwhile and as a community I think we should support it.

It follows from the above that one of the best things we can do as a community (in addition to becoming actively involved in Ask Patents), I think, is to up-vote good, existing, on-topic questions. This will help get the users who are active there the privileges they need to deal with some of the issues on the site.

For example, Tracking and Managing Group Expenditures (Google) - Patent Application - PRIOR ART REQUEST is a perfect on-topic question and a great success story, and that question and most of its answers deserve far more credit than they have received so far. Another success story is Scaling based on pixel density (Microsoft) - Patent Application - PRIOR ART REQUEST. And there are many others.

From another of Joel's articles:

Got 15 minutes? Go to Ask Patents right now, and see if one of these RFPAs covers a topic you know something about, and post any examples you can find. They’re hidden in plain view; most of the prior art you need for software patents can be found on Google. Happy hunting!

Not the answer you're looking for? Browse other questions tagged discussion moderation .

44
What is "Ask Patents" and why is it secret?
19
How can a site without moderators start the process to get elected and/or appointed moderators?

1491
Fastest Gun in the West Problem
601
Exit strategies for "chameleon questions"
724
Your answer is in another castle: when is an answer not an answer?
2788
A Terms of Service update restricting companies that scrape your profile information without your permission
2502
Firing mods and forced relicensing: is Stack Exchange still interested in cooperating with the community?
282
An open letter on the state of curation and moderation
719
Dear Stack Exchange: a statement and a letter from your moderators
2253
Stack Overflow is doing me ongoing harm; it's time to fix it!
981
Firing Community Managers: Stack Exchange is not interested in cooperating with the community, is it?
551
The company’s commitment to rebuilding the relationship with you, our community