How'd this happen? I thought that these votes were old enough to not cause such a significant loss. Due to the daily rep cap of 200, I didn't even gain 8000 rep from that answer which was posted less than 15 days ago.

Note: I'm not questioning why the post was deleted. I'm questioning the number and the timing.

Here's another detail that I happened to notice while looking back at my chart:

The system believed that on a single day I had earned 2,600 rep. This is starting to smell more like a bug.

The post was less than 60 days old, which is why any reputation was lost

From How does deleting work? What can cause a post to be deleted, and what does that actually mean? What are the criteria for deletion?:

reputation earned for posts with a score of 3 or higher, and where the post has been visible on the site for at least 60 days, is retained.

Also from How does "Reputation" work?

Deleting and undeleting posts may reverse reputation effects as well, if these posts have votes. Actions previously taken on deleted posts cease to affect reputation within five minutes (source), unless the post meets both the following criteria (in which case the reputation effects will be permanent) (source):

That question was posted on 10/10/2019 which was only about 13 days ago, so any reputation that came from that is permanently lost now that it is deleted.

Luckily, you don't seem to have actually lost 8k rep, only about 800

From the archive of the post in question it appears that you had 22.8k rep before the post was deleted and you had 22k rep before your rep gains today. So it doesn't seem like 8k rep was actually deducted from you from what I can see.

Instead it seems that you only got knocked about 800 rep, which actually seems to make sense given your rep chart looks like:

You only did not repcap on about 5 days out of the 13 or so that elapsed since you posted the answer. So that's 5*200= 1,000 rep lost assuming you repcapped only from the now-deleted post each of those 5 days. However, it looks like you also got some rep from other posts those days. Estimating it to be an average of 50 non-deleted-post rep for each of those days gives us 1,000-250 = 750 rep lost.

This is pretty close to the actual value you seem to have lost which was a rounded 800 rep and given all the assuming, estimation, and rounding that I've done seems very reasonable to say this all working as we'd expect.

Adam Lear has given the only lead I've seen yet:

The accounting is correct, but the display is a disaster. Which is... about par for the course when it comes to deleted posts/deleted votes. I'd have to dig deeper (and unfortunately I have absolutely zero time right now) to see if we could fix this up. Long story short, once a post is deleted, trying to figure out what effect a vote would've had at the time when it wasn't deleted gets real complicated real fast. – Adam Lear ↵♦ 10 mins ago

It looks like the same bug has caused the monthly reputation league page to show incorrect numbers for the reputation earned this month. (I came across this because I happened to be scrolling through the page just as the UTC day was rolling over. I was going to post this as a new question, but as I explain below, I believe that this is an instance of the same bug reported here.)

As you can see, after I reloaded the page at 0:00 UTC today (when the page updates), there are several users (circled in red) that have apparently earned much more reputation this month than they actually have. Ordinarily, this isn't an extraordinary occurrence: the reputation change per time period displayed in the right column excludes reputation changes from "private" reputation events such as post deletions, so it's not uncommon to see cases from time to time where the reputation change is "higher" than the current reputation.

The oddity here is not merely that - it's the fact that all of a sudden, many users' reputation change this month increased drastically from what they were the previous day. In particular, the user depicted below as being in the #9 position was actually in the #1 position yesterday, with a similar amount of reputation change.

After some research, I determined that all the affected users had answered the now-deleted question, earned a very high score on their answers, and then had their answers erased as a result of the question's deletion. (The user in the #9 spot, whose right column hasn't really changed, had also posted an answer there, but their answer was deleted before the whole question was deleted.)

Additionally, I noticed that you (Makoto) were also one of the users whose rank also suddenly ballooned. Your right column was around 3,000 yesterday, but has risen by around 8,000 to 11,000. Coincidence? I think not. 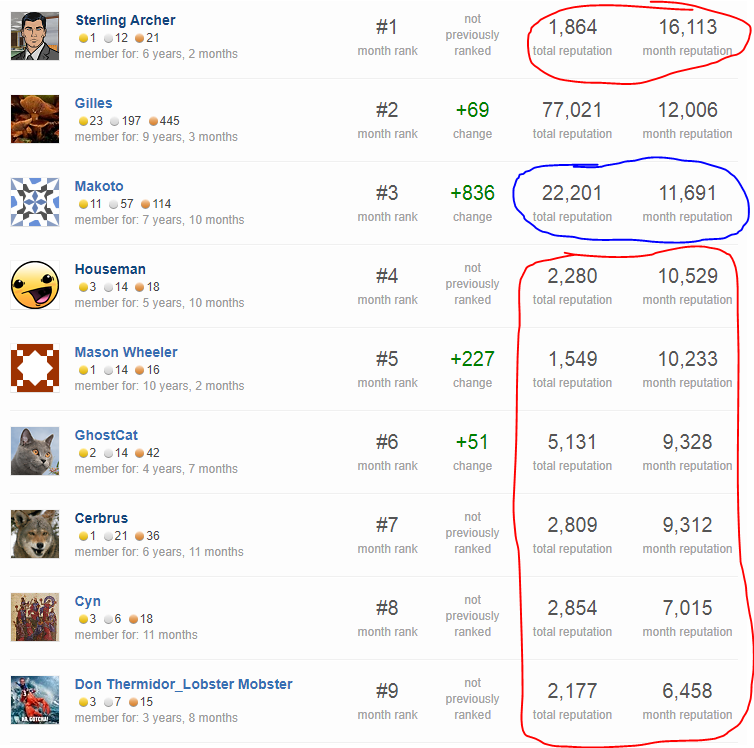 In summary, while this overall bug may just seem like a minor accounting mistake in reputation history pages, it also affects the reputation league pages, giving people a highly inflated ranking.

This is only speculation, but could it simply be that this particular page shows gains or losses without considering the daily rep cap, and instead used the net rep gain (rep from upvotes - rep from downvotes).

This wouldn't be the first query is less accurate/simpler to reduce load.

(I am assuming that a question or answer that gets so many votes quickly AND gets deleted shortly after creation is a rare enough case that not taking into account rep cap wouldn't be a problem).

580
How does "Reputation" work?
517
How does deleting work? What can cause a post to be deleted, and what does that actually mean? What are the criteria for deletion?
44
Why is my total reputation less than my monthly reputation?
2
Reputation discrepancy in achievements dialogue after user removal

31
Why is the inconsistent reputation system "by design"?
842
What does "user was removed" mean and why did my reputation change because of it?
5
Does the loss of reputation from unaccept happen on the day of the unaccept or retroactively?
6
Weird rep cap behavior, yesterday vs. today
25
Is there a bug with the RESPECT hat?
7
My reputation yesterday didn't hit the daily rep cap, so why didn't I get rep for these upvotes?
15
How exactly do deleted answers interact with reputation calculation with respect to the daily rep cap?
3
Daily reputation cap doesn't account for reputation * loss* due to bounty awarded?