Mobile experience of the website not standardized, very impractical to use and add code

Title says it all. When writing an answer on a mobile device the options for adding snippets do not appear at all in any way in the slightest, there's no way I can either add, or even view, a code snippet in the mobile browser, the best I can do it three `s manually and write the code, but when then there's no way to add a tab or indent, in desktop one can copy code from test editor, select it, and format it, this option is also not available in mobile, how am I supposed to write answers that require code?

Basically a simple mobile code editor should at least be added, that inserts a tab character on request, and either results in a snippet or even just basic formatted code would be fantastical, or at the very very least the ability to select a block of pasted text and indent it, like it works on desktop, since there's no way to do that currently

A simple reason why the current desktop site doesn't work is because of the small buttons, if the desktop site should be the new normal, then the button sizes should simply be increased, here are a couple screenshots demonstrating the problem: 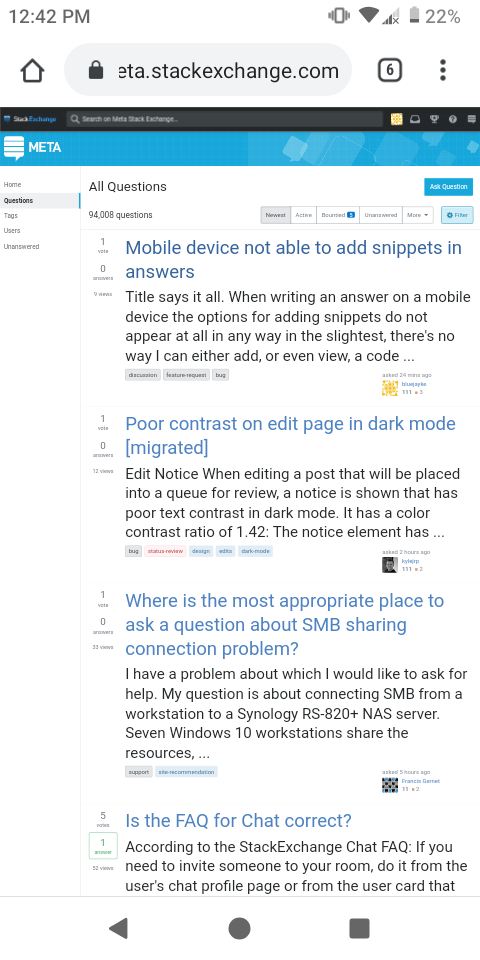 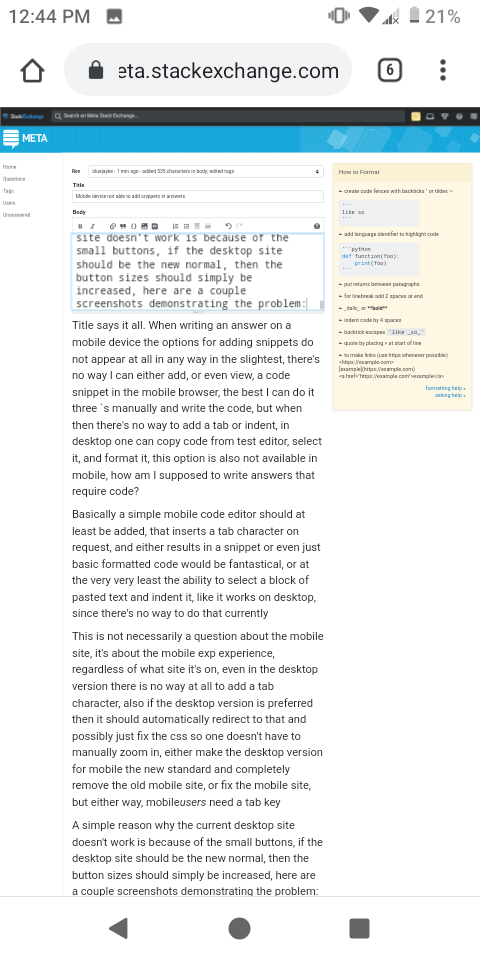 Notice how small the buttons and links are. If one remains zoomed out then one is not able to focus on the correct button, if one zooms I'm to click on the button that ruins the mobile flow anyways, if people are expected to use the desktop site on mobile then there buttons should be bigger, and either way a tab key should be added

The size of the buttons themselves isn't the only problem, there are several inconsistencies in the css in other areas when viewing the desktop site on mobile, including the comments of the original user being smaller: 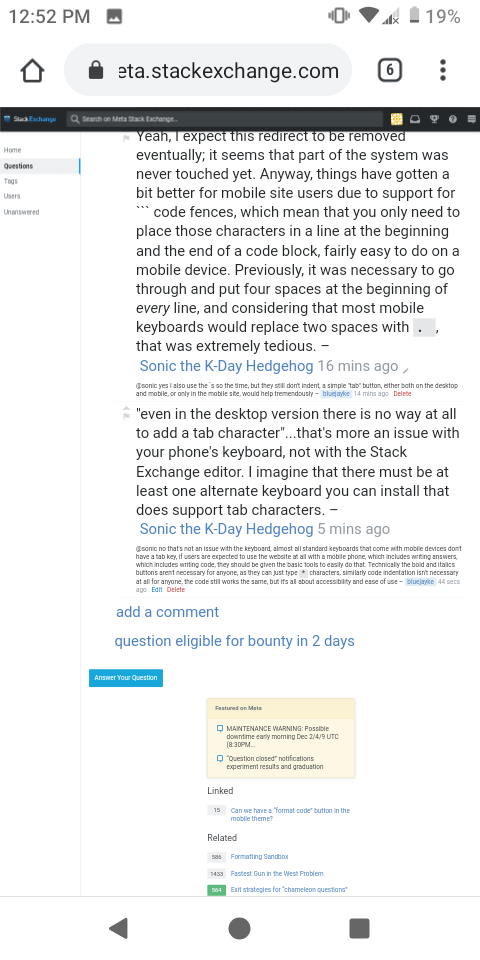 As well as the text input for editing and inserting answers (two pictures up) being too small to select and scroll through, the css of that when viewing on a mobile phone should also be made bigger, it mobile users should be expected to view the desktop version, but if you ask me in order for the mobile site to work at least temporarily for now is to add a simple tab button or code format button we the very least, if the old mobile site isn't expected to be used, then it should be completely removed, but if it's still there it should be at least minimally usable 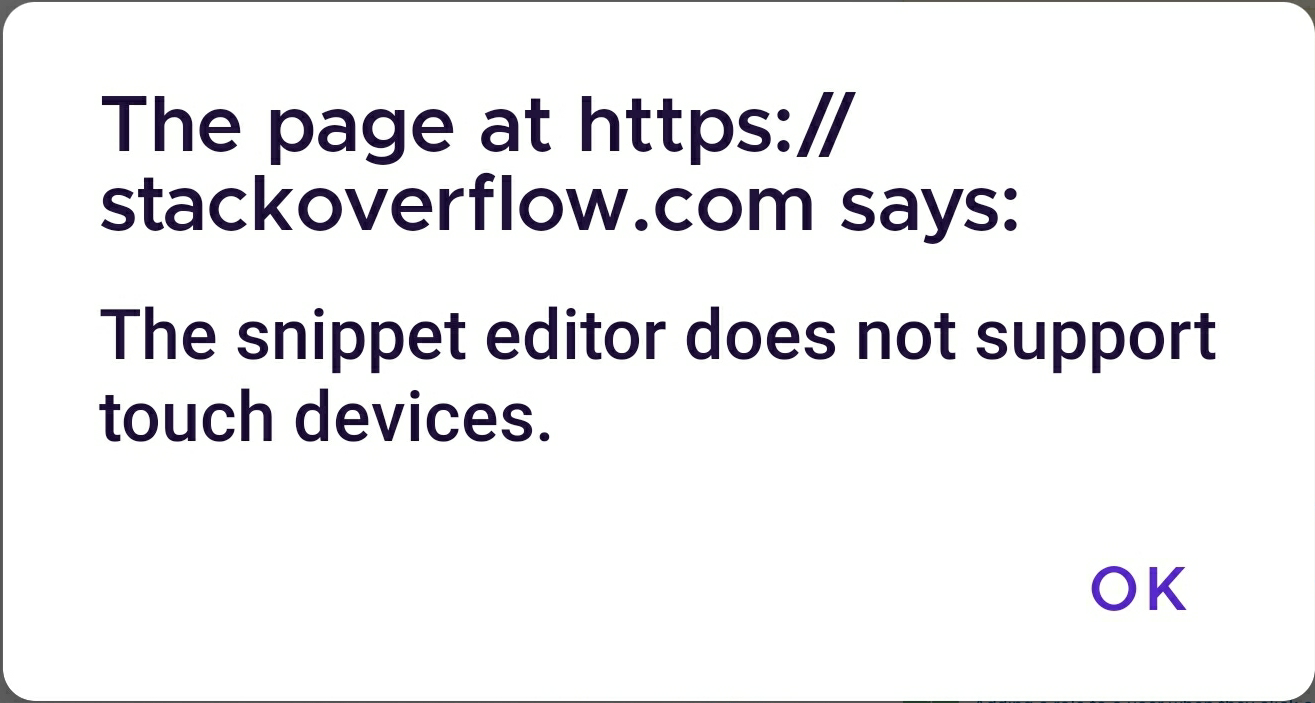 This question kept being associated with another one that was left for dust, but the other one only dealt with a code button, but this one deals with the entire mobile experience, including the desktop site, that is not dealt with in the other one, specifically: The small buttons and small input size for questions on the desktop site that is not addressed at all in any way whatsoever in the slightest in the other question, the indentation is part of it but mainly just being able to use it, as well as sniper support not being mentioned at in any way whatever in the slightest in the other question

Can we have a "format code" button in the mobile theme?

It's very difficult to post code on Stack Overflow using the mobile theme on an iDevice. I've tried indenting the code by 4 spaces, but I'm still getting an error that the code is not formatted correctly. Not to mention the fact that it's extremely tedious to do this by hand.

It would be much easier if we could just select all of the code and click a single button to format it automatically, much like we can already do using the full site. This seems like an important feature for Stack Overflow, even on the mobile theme. If we're going to be able to ask questions, we should be able to post snippets of code that accompany those questions

While the features of this question include:

Bigger buttons on the desktop site when accessed on mobile

A potential tab key button, similar to how code editor apps work, though this is not as necessary as the other things

A fixed redirection, straight to the newly improved desktop (for mobile) site, without going to the ten year old unmaintained "mobile" site that is anyways discouraged from working with indenting etc

16
Can we have a "format code" button in the mobile theme?
4
Snippet editor for touch devices can be opened if you show perseverance
2
Some fonts are way too small to be used on the responsive design on Chrome for a regular Android phone

626
Formatting Sandbox
1844
Could we please be a bit nicer to new users?
266
Shortcut or button for copying posted code from Stack Overflow
604
Exit strategies for "chameleon questions"
1251
Don't throw away all votes when a user is deleted
540
The current review system encourages fake reviews; some people upvote everything rather than actually fixing problems
537
The MIT License – Clarity on Using Code on Stack Overflow and Stack Exchange
2793
A Terms of Service update restricting companies that scrape your profile information without your permission
2510
Firing mods and forced relicensing: is Stack Exchange still interested in cooperating with the community?
216
Deprecating our mobile views