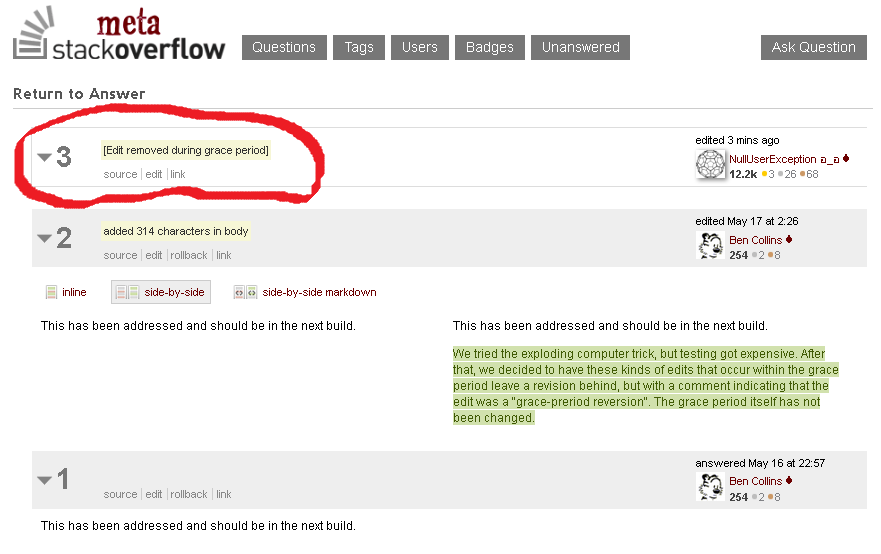 4
[Edit removed during grace period]
789
Recent feature changes to Stack Exchange
362
New three-tiered badge idea: Explainer →Refiner → Illuminator
113
Could we have the ability to mark a change as minor in questions or answers?
98
How does editing work?
29
handle 'strategic downvotes' more 'gently'
12
Potential FGITW "fix"?
12
Editors can instantly reject suggested edits without leaving a trace in the revision history
17
Serial downvote reversals don't always appear as such
13
How long can you change your vote?
See more linked questions

1085
Should 'Hi', 'thanks', taglines, and salutations be removed from posts?
171
Make first draft of a new answer part of the permanent revision history
145
Improvements to a suggested edit cannot be submitted when the suggestion is approved during editing
6
Rollback option is displayed for the last edit if it is followed by another revision entry
296
How do we encourage edits to obsolete/out of date answers?
7
Why is it called "initial revision" if it's not a revision?
718
Dear Stack Exchange: a statement and a letter from your moderators
580
We're switching to CommonMark