TeX rendering is broken on sites like Math and Physics when viewed over SSL. 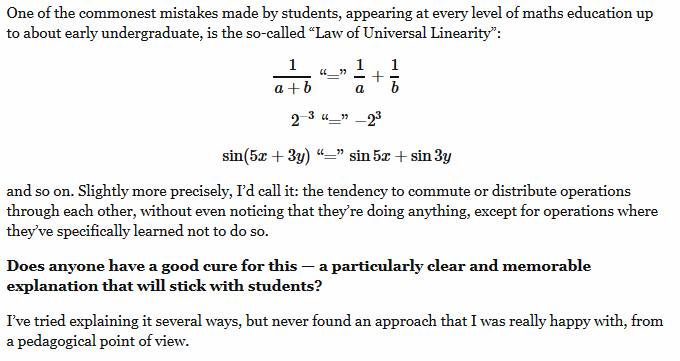 When accessing one of our MathJax enabled sites via the HTTPS protocol, we now use the CDN specified by the MathJax FAQ:

How do I access the MathJax CDN using a https secure connection?

The MathJax CDN utilizes Rackspace’s CDN service. Unfortunately, this currently does not offer https support for the default address cdn.mathjax.org. However, as an alternative, you can use the following unmapped address:

While not as appealing as cdn.mathjax.org, this address is stable and safe to use. For more information, see our documentation.

So everyone should now be able to enjoy the beauty of quality mathematics notation whichever protocol they prefer.

As pointed out by Davide Cervone above, MathJax CDN does support HTTPS as long as you use the hostname c328740.ssl.cf1.rackcdn.com instead of cdn.mathjax.org. Yes, that looks a bit uglier, but that's all "under the hood".

Thus, this bug can be fixed by replacing the URL:

on pages served over HTTPS.

Alas, the ugly hostname works only for HTTPS, so protocol-relative URLs can't be used here.

Edit: While waiting for the SE devs to fix this, I managed to find a way to work around the problem with a user script. Basically, the following code will reload MathJax over SSL if it failed to load normally:

(There are a bunch of tricky little issues here that made this hard to solve, like the fact that MathJax tries to be clever and find its own base URL by searching the DOM for script tags; if the original script tag isn't removed, MathJax will thus try to load its submodules over HTTP and fail.)

I've incorporated this code, along with several other minor fixes, into something I'm calling the Stack Overflow Unofficial Patch. Please give it a try and let me know if you find any issues.

For folks who are getting this bug because they're using HTTPS Everywhere, I've pushed a rule to fix this by rewriting the MathJax CDN: https://github.com/EFForg/https-everywhere/commit/a9b1a4cf448d67eb62c869712b778454e902d62a. However, this won't actually fix anything unless you've turned off active mixed content blocking in your browser; Firefox and Chrome have (IMO, incorrectly) implemented mixed content blocking in such a way that the blocker fires before HTTPS Everywhere can rewrite resources to SSL. :(

Ugh! Until that bug is fixed, I would recommend turning off the HTTPS Everywhere rule when you need to TeX (click on the icon in the addons bar, select the "Stack Exchange (partial)" rule to toggle on/off).

PS: This answer should really also go in https-everywhere breaks MathJax due to https/http mixed-content rules but I don't have sufficient reputation to add it there.

Not the answer you're looking for? Browse other questions tagged bug status-completed mathjax ssl .

410
Decision on rejected edits should be displayed as a notification to the editor
7
The Stack Exchange SSL certificate does not cover Ask Ubuntu or Math Overflow
23
Please add TeX rendering on the iOS app
26
i.stack.imgur.com has an expired SSL certificate
117
Roadmap to HTTPS: serving and uploading HTTPS-images only
448
Network-wide HTTPS: It's time
2
How to write question offline for Math Stack Exchange?