Notification when my answer is unaccepted?

I just lost some reputation, presumably because someone changed their selected answer from mine to someone else's. Can these losses of reputation be noted on my reputation page similar to the other ways in which my reputation fluctuates? I'd like to figure out which answer was unaccepted so I can review it and possibly learn a thing or two.

I read this post covering the same topic, and I get that the vote record no longer exists in the database, but still isn't it possible to provide notification to the user of this vote change?

This was implemented last night, you'll now see unaccepts in your reputation history (in the user profile).

It strikes me that the vote record being removed from the database makes rep recalcs fundamentally unreliable. For example, take a day when this happens:

Basically a rep recalc is meant to replay history - but it can't do that if the history isn't there any more. A vote given and then removed is not the same as the vote never being cast. It seems to me there are three options:

Personally I'd like the first option - although I see the major benefit as being things like this overall question, where a change has happened (losing 15 rep) but there is no data left to say why it happened.

The issue TheTXI was highlighting in that response is that the /recent page simply lists data in the "votes" table of the database. Upvotes, downvotes, and accepts are all noted by a single record, these are accumulated and displayed in your /recent page.

However, when an answer is unaccepted, a record is actually being removed from the database. The query which shows your /recent page has no way of knowing that a record used to exist, therefore it shows nothing. Changing this would not only require adding database data when the accepted answer changes, but modifying the /recent page to acquire that data as well as the plain votes data.

Just for the record, this is the answer you've got unaccepted. 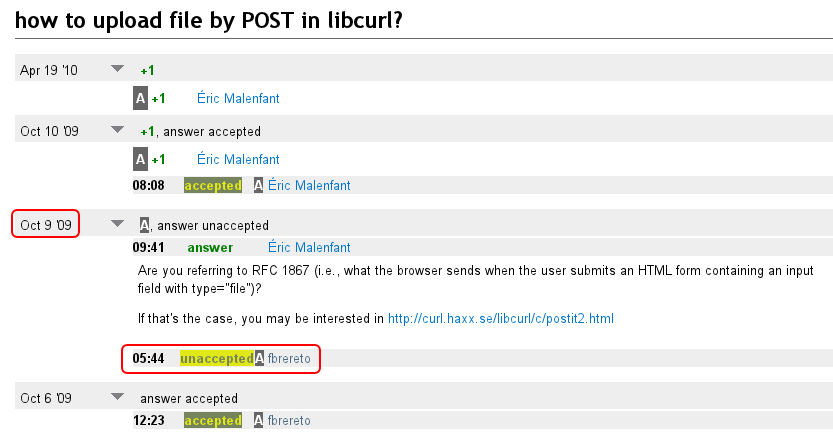 Not the answer you're looking for? Browse other questions tagged feature-request status-completed reputation answers reputation-summary .

32
Notify when an Answer is Un-accepted
4
A reputation change does not show the reason of that
1
Is there a way to track accepted answers that have been un-accepted?
247
Please show us when we lose an accepted answer
44
How do you want to be notified of unaccepted answers?
19
Reputation notification of deselected answer?
20
Show rep lost or gained from rescinded votes
4
I don't know why my reputation decreased
6
Negative reputation but no activity
6
Negative rep in activity mouseover despite positive rep?
See more linked questions

1099
How does accepting an answer work?
19
Reputation notification of deselected answer?
11
If your answer is unaccepted after becoming Community Wiki, do you still lose 15 rep for it?
417
Decision on rejected edits should be displayed as a notification to the editor
1245
Don't throw away all votes when a user is deleted
418
Add an "I don't understand" option for review audits
296
How do we encourage edits to obsolete/out of date answers?