Most of the time, you don't want to see unanswered questions in the duplicate dialog, since you can't normally close as a duplicate of them. This behavior is intended, at least as it says here:

The search results include only answered questions (per the usual SO definition of "answered", where the question must have an accepted or up-voted answer).

But there are times when you can close against something unanswered:

But the dialog doesn't show unanswered posts in those circumstances.

In the past, I have wondered why I was mysteriously unable to find some specific posts in the duplicate dialog. For example:

In both cases, I had to go get the URL and paste it in manually.

The best way to see this is to use answers:0. I hope you don't think there are only two unanswered questions here! 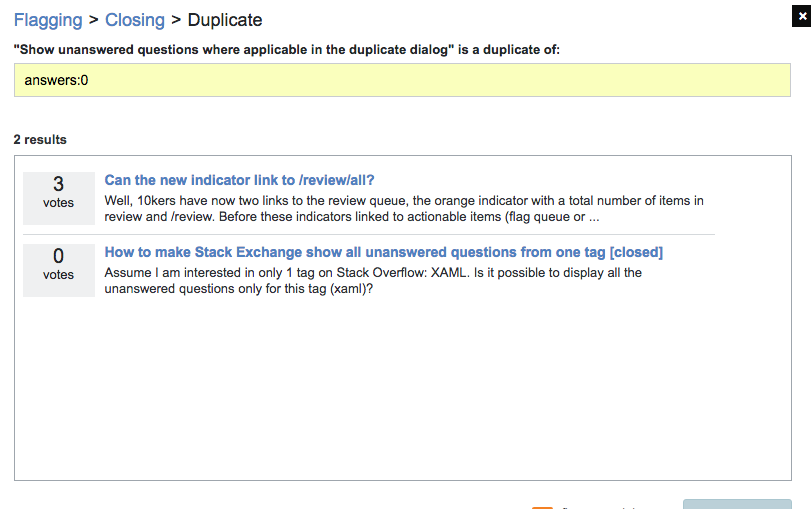 Most of the time, the results for this search are merged questions (but not all the merged questions). I have no clue why that one post shows up here. (Maybe it was merged and un-merged at some point?) This current behavior is pretty useless.

It should be very easy to fix the dialog on meta. It might take a little more effort to have the same user's posts show up on main, but I can't imagine it being prohibitively difficult.

Based on our current roadmap, this isn't work that we plan to do soon, as it doesn't coincide with functional areas that we plan to improve in the near future. We recognize that time and thought was put into this request and that duplicate questions can be annoying especially when they are unanswered. Hopefully this will be something we can take on in the future, but for now I'm marking as status-declined.

Not the answer you're looking for? Browse other questions tagged feature-request status-declined vote-to-close duplicate-questions unanswered-questions .

6
Cannot flag duplicate question if it has the identical title
-18
Changes to "close as duplicate"
13
Nothing happens when I press "Submit" on duplicate suggestion
2
If a user name is long enough, we can comment anything to that user

711
How do I get attention for one of my own questions without a good answer?
187
Do not delete good duplicates!
385
Send authors an inbox message if their question is closed
273
The title word filter is one of the worst ideas ever implemented on SO
179
We should be able to close questions as duplicates of any question
416
Add an "I don't understand" option for review audits
305
Build and strengthen the Stack Exchange community with "crossover questions" between sites
333
Gold tag-badge holders and moderators can now edit duplicate links