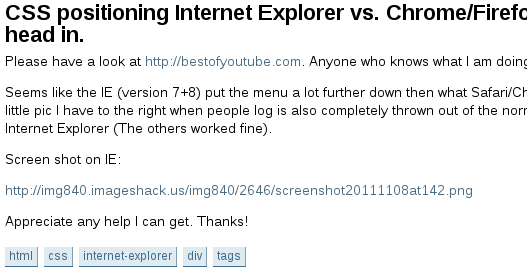 -11
Remove the restricton of attaching images with low reputation
1
Image not showing up in question
798
Recent feature changes to Stack Exchange
115
Mysterious Butt
24
Why not require a bit of reputation to post Chinese characters?
20
Avoiding "enter image description here"
10
What site-specific configuration settings are possible, and how have they been implemented by the various communities?
7
Why are 1 rep new users allowed to post rendered images?
11
Which SE sites require 10 reputation points to post images?
8
Possible bug with new spam user uploading image with just 1 rep
See more linked questions

203
Avoid the Streisand Effect - be clear about the reason when suspending an account
56
Warn new users earlier that they cannot post links or images
0
New users should be able to use a CAPTCHA to post images and links
54
Allow anyone to comment but hide low-rep users' comments until reviewed
3
App image uploader replaces previously-uploaded image Markdown with most recently-uploaded image URL
118
Roadmap to HTTPS: serving and uploading HTTPS-images only
282
An open letter on the state of curation and moderation
719
Dear Stack Exchange: a statement and a letter from your moderators