Optionally, the flagger can also cast a downvote. Some strange magic happens if the post is subsequently improved, but the whole process is a kludgey work-around that was put into place when we had an issue surrounding folks neglecting to vote (primarily on questions).

In order for voting to remain a useful indicator of a post's relevancy and on-topic standing, we need to try to avoid pile-on signal where possible. VLQ flags, effectively, let users cast two downvotes on a question, and that can be pretty brutal to new users. Since we've introduced rolling rate limits and better anti-recidivism systems, we don't really need auto-voting on suspected low quality posts; the organic votes cast by carbon life forms do a fine job.

It goes without saying that the pile-on effect is pretty crushing to new users, too; it's mean, it's unnecessary, and it's actively unhelpful.

We'll still auto-downvote SPAM, there won't be any major changes there, what we want to stop doing is automatically tacking on a down vote that was designed to solve a problem that we pretty frankly no longer have, and it's not because auto-downvoting worked so well :)

We're putting this out early for discussion, in case there's an argument compelling enough to reevaluate how useful the system might remain, but we're pretty confident that it can fade off into robo-history pretty uneventfully.

Voting is always going to be an important part of how the site works, but we've got to look at a way where we can encourage more consistent application - reeling in the robots is one way to start, so we'd like to start there.

This has been completed for questions only. We're going to look at the answers part of this soon, which is going to require some more work. Title updated to reflect that, too.

Since it's pretty much my fault that VLQ comes with an automatic downvote to begin with, I feel like I should weigh in on this.

I feel very strongly that we should not be removing posts we aren't even comfortable slapping a downvote on.

For all the hand-wringing about downvotes over the years, at least they're transparent: if your question or answer gets downvoted, you know it. Everyone knows it. There's no hidden tribunal deciding the score of your post without your knowledge; every vote is visible.

Deletion is not so transparent. We've made some improvements to that over the years - you can at least view your deleted posts now - but it still feels like gaslighting sometimes; you thought you wrote something, but it's not there on your profile...

None of this is an argument for automatic downvotes though; as long as folks are good about only flagging and deleting things that they're also ok with downvoting, we don't need this system. So... Are they?

Once upon a time, we had automatic downvotes for certain close reasons too. We removed those when they were no longer necessary - when > 70% of closed questions got downvoted the old fashioned way.

So let's take a quick look at the numbers for VLQ:

That's data for Stack Overflow, taken from a 30-day period starting 30 days ago (to allow the dust to settle). I'm not gonna do a fancy graph thing, but... Back when I originally proposed this solution, the numbers were about 60% for questions and 40% for answers. Folks have gotten a LOT better about downvoting questions. They have NOT gotten much better about downvoting answers.

The good news is... We don't need this for questions. We can turn it off; less unnecessary pile-on, essentially the same signal.

The bad news is... We still haven't fixed the problem when it comes to answers.

But never fear! I have two potential solutions: a cheap simple one, and a... much more elaborate one.

We should listen to 2011 me. That guy was quoting poetry & stuff; he sounds like a pretty savvy dude, not at all broken down and sick of life and drunk on cheap whisky. We have real-time rep recalcs now, which we didn't in 2011 - so you get the rep back for an answer downvote as soon as the answer is deleted; your downvote on a VLQ answer is a wager that it is, indeed, nasty enough to be removed.

So here's what I'm thinking, for answers only: 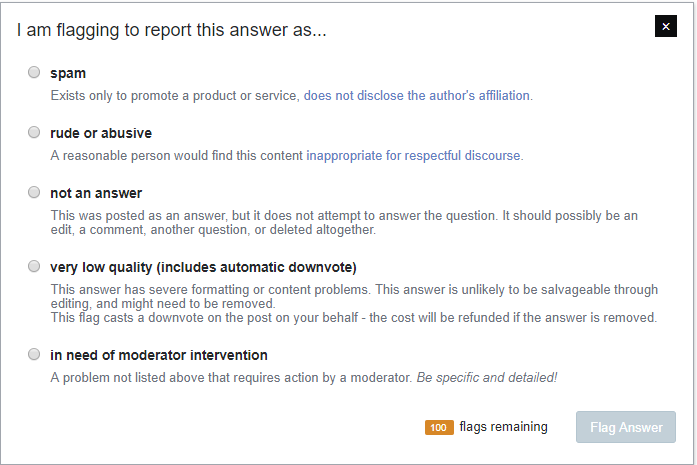 Advantages of this solution:

We don't actually need VLQ flags on answers; they're not used that much, and for "cat on keyboard" type stuff I've been encouraging the use of abusive flags on those for years now anyway.

Yes, it'd be a pain to strip out, and there's not a lot to be gained from doing so just for the heck of it... But what if we took this opportunity to kill two birds with one stone? 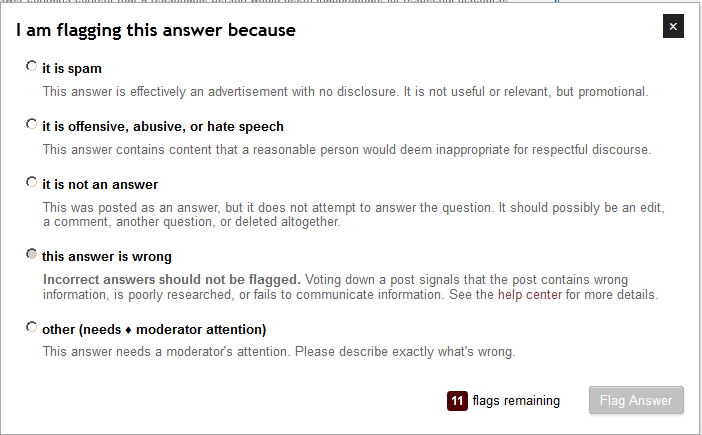 (Hat-tip to the inimitable jmac for that mockup - I miss you!)

This is a bit less forceful than the cheap option above, but it still offers immediate encouragement to downvote - just now instead of flagging for stuff that's not horribad. And, leaves NAA for stuff that isn't even recognizable as an answer, and abusive for stuff that's straight-up eyeball-searing garbage.

Advantages of this solution

There's an automated flag that's raised on posts which trip various quality heuristics. It behaves pretty much identically to VLQ, right down to the automated votes. Just FYI.

This is particularly "mean" to the new user because s/he normally assumes that the downvote came from a person. Thus the system's behavior is both confusing to the new user and makes the community look "meaner" than it actually is.

Generally I challenge the presumption that downvotes are "mean." But when they are applied automatically by the system, often times without the intention of the flaggers or the flag validators, it seems to me that the system, if not "mean," could at least be nicer.

Further, the auto-downvote can do the wrong thing sometimes. When I was starting out as a moderator a general piece of advice I received was: mark flags helpful if they were helpful, even if you didn't take the implied action. I remember handling a VLQ flag where the case was borderline; it was legitimate for the user to ask moderators to take a look. So I marked it helpful but didn't delete the post. Imagine my surprise when the post got an automatic downvote right after I validated the flag. I know, because it's come up in TL, that I'm not the only moderator who's been surprised by that. The automatic downvote is unexpected, unnecessary, and occasionally unwanted. Let's reserve votes for human beings.

The automatic downvote for spam or offensive posts serves a different purpose (for questions); when a question reaches -4 it drops off of the front page. We want to limit the visibility of posts that have been identified as probable spam. What we really want is for posts with a few red flags to drop out of view; the only implementation we have right now is votes. If we can alter visibility without creating non-human votes, that would be better. It's possible that now, with Charcoal, we delete these posts quickly enough that this concern is no longer a big deal; I'd want to see a separate meta question where we could discuss it before getting rid of spam downvotes as part of this question about VLQ downvotes.

Well, on a healthy site we have quite a few other mechanisms that handle low quality posts - and I think leaving voting to carbon based lifeforms feels... less hacky. We should be guiding not punishing.

I've often told folks the point of a flag is to have someone look at a potential problem - and if there's folks doing review or even seeing it via the mod queue, the ability/choice to vote or better yet guide probably does more good than a extra downvote, unless we want a quick deletion by our users.

The downvote doesn't help in any way, especially if there's a new user unused to the more... byzantine intricacies of SE - they won't even know its automatic

Not the answer you're looking for? Browse other questions tagged discussion status-completed down-votes low-quality-posts .

800
Recent feature changes to Stack Exchange
100
Is the Very Low Quality flag too ambiguous?
149
Rolling question rate limits are now network-wide
68
Why don't we treat rubbish the same as spam?
60
Add a deactivated "wrong answer" flag option
58
Community downvotes posts that were just fixed
42
What is the reasoning behind limiting "recidivists" to post one question per week?
29
Should posts flagged low quality get an automatic downvote from the flagger?
44
Please provide a flag option clearly designed for gibberish, contentless posts
29
Is it time to be rid of automatic down votes on certain closed questions?
See more linked questions

135
Should downvotes on questions be "free"?
422
Can a machine be taught to flag spam automatically?
461
Network-wide HTTPS: It's time
829
Net Neutrality and Stack Overflow / Stack Exchange
335
Brace yourselves: The GDPR is coming!
363
Let's take a look at the interaction between staff and the "power users" of the network
582
We're switching to CommonMark